Is it rational to be afraid of flying (or driving)?

Of course it isn’t.

Being scared of flying is the textbook example of an irrational fear. Flying in a commercial airplane is one of the most absurdly safe thing one can do on the planet. During the entire 2010s in the US, only one person died in a commercial aviation incident despite over 6 billion (that’s 6,000,000,000) passenger segments. That certainly does not mean that you can say with any statistical rigor that you have a 1 in 6 billion chance of dying in a plane crash every time you step on a plane, but it certainly does showcase the incomprehensible track record of airline safety in recent years. For reference, about 100 Americans die each year from getting burned by hot tap water. If you live 30 miles from the airport, you have a 1 in 3 million chance of dying in a car accident on the way there.

Rather, on average someone dies every 90 million miles driven in the US This does not necessarily mean that you have a 1 in 90 million chance of dying per mile. There are great variations given your seatbelt usage, propensity to drive drunk or distracted or make reckless maneuverers, the age of your car, the time of day you drive, and the type of road you drive on (believe it or not, urban interstates are the safest type of road and about 4-5x safer than rural undivided highways). If you simply wear your seatbelt, avoid showing up to the airport intoxicated, stay off of Instagram, and drive on an urban interstate that is likely to lead to the airport, your odds of dying per mile are likely much lower than one in 90 million, but given the difference in order of magnitude, the point still stands.

A note on the exponential distribution: Technically, when determining probabilities like this, one should use the exponential distribution, Pm(x) = 1-e-x\k), instead of just multiplying the odds of dying per mile by miles driven. Multiplying breaks down because if you drive 90 million miles, you would have a 100% chance of dying which obviously isn’t correct. However, because the odds are so small and nobody is going to drive anywhere close to 90 million miles or fly 3.7 billion miles in a lifetime, multiplying the odds by the miles and assuming a linear relationship yields essentially the same result for our purposes and is much easier to understand.

Case closed. Being afraid of flying is completely irrational. Except, it’s not that simple. Not because of crashes or terrorist attacks, but because of supermassive black holes 2 billion light years away.

Ionizing radiation is radiation strong enough to cause DNA mutations which could possibly lead to cancer. Not to be alarmed, but you are always being bombarded with ionizing radiation from several sources such as radon gas from rocks, the sun (wear sunscreen), medical equipment, cigarette smoke, and finally, cosmic rays.

Luckily, the vast majority of mutations don’t lead to cancer both because they don’t change anything important or because your body has mechanisms to correct errors. In fact, it is likely that you get billions of new mutations every day. But there is a tiny, tiny, chance that a mutation can lead to cancer.

What exactly is the risk of getting cancer?

Based on estimates by studying nuclear bomb survivors and a linear no threshold (LNT) model and given the radiation levels at the altitude that airplanes fly, the risk at 550 mph is about 1 in 3.7 billion per mile of getting cancer. Keep in mind that this is based on the LNT model, which while used by health organizations, is not infallible. There are definitely experts who claim that low levels of radiation pose no risk of cancer and might even be beneficial.

The question is, would it ever be rational to avoid flying because of this information? To answer this question, I calculated the expected minutes left to live (assuming a life expectancy of 90) for each age between 21 and 80 and multiplied this by the risk of getting cancer by mile. I then applied an emotional suffering multiplier of five because getting cancer would involve emotional trauma and not just lost time. I came up with a loss of about .05 minutes per mile flown at 21 years old that declines with age. To make this more comprehendible, I divided this by the time it takes to actually fly a mile on average and came up with a percentage multiplier that I should mentally add to a time of a flight before deciding if that flight is worth it. At 21 years old, it is 40%, so for example, I should pretend a 2-hour flight is 2.8 hours and decide if I still want to do it. If I am willing to fly 2.8 hours to go somewhere, it is still rational to take the flight. This multiplier decreases with age because I am losing less of my life by getting cancer. 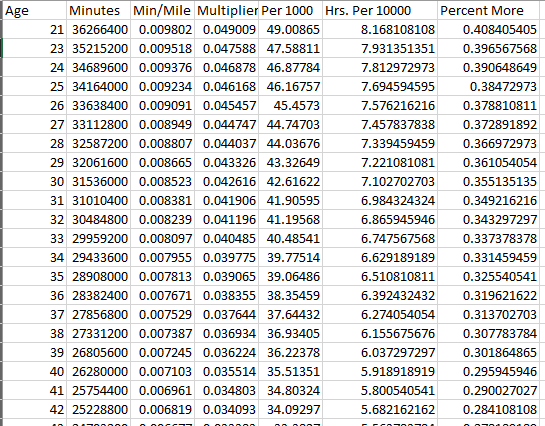 Here is a graph off the multiplier by age: Once I become old, the multiplier becomes negligible because I wouldn’t live much longer anyway.

Problem solved then, right? Well, not exactly. I can see some major flaws with this reasoning. First of all, I was assuming that I would just die from cancer if I rolled the unlucky dice. Cancer does not work like a plane crash, as in, it might take years or even decades to develop. I should probably shift the whole graph to the left so that even at 21, 40% is far too high. Secondly, getting cancer doesn’t necessarily mean that you’ll die and hopefully cancer treatment will get better with time making the graph not linear and also shifted down. Also, an “emotional suffering” multiplier of five is completely arbitrary. I have no idea if it’s too high or low and I would have to take other people’s emotional suffering into consideration too if I am not being selfish. Here is the graph without the multiplier since it is so subjective: Then there’s the fact that the linear no threshold model might not even be correct in the first place. While it is generally used by major health organizations, LNT is not without criticism. Many scientists claim that low level doses of radiation don’t increase the odds of cancer. Some studies even suggest a beneficial effect. One paper claims that “Epidemiological data provide essentially no evidence for detrimental health effects below 100 mSv, and several studies suggest beneficial (hormetic) effects.”

Low level doses of radiation cause such small theoretical increases in cancer rates with LNT that it is hard to study. Some scientists claim that the LNT model leads to unwarranted fear and uncertainty and people doing things that cause unneeded hardship. People living near Chernobyl have foregone having children that they wanted, tore their families apart by moving, and worried for decades about developing cancer. Even near Fukishima where the risk is tiny even using the LNT model, people have long lasting mental health effects from evacuations and the Japanese government has spent resources removed dirt around Fukuhara that is less radioactive than Colorado naturally is.

Even in the context of avoiding flying, people might die in car accidents, miss important family events, or forego unforgettable travels in fear of a tiny risk of radiation. Forget the graph, my advice would be to not worry about a risk so small and uncertain unless you are going for the lifetime world record for most miles flown or something. In that case, I’d be more worried about the health effects of endless jet lag.

But what if you’re thinking about doing a road trip? Driving is, without a doubt, more dangerous than flying and arguably one of the most dangerous things people do on a regular basis. Not to mention that the risk is much more concrete.

Just like the difference in danger people perceive flying to carry compared to what it really is, road safety doesn’t always follow people’s expectations. Interstates are actually the safety type of road despite the high speeds. Specifically, urban interstates are the safest type of road and rural roads are the most dangerous by a factor of four or five. So, if you’re concerned with safety, you may want to avoid taking the scenic route home.

As mentioned early, someone dies in the US about every 90,000,000 miles driven. However, according to the CDC, simply wearing your seatbelt reduces the risk of a death by car accident by 45% for a front seat passenger. About half of the people who die in car accidents aren’t wearing their seatbelt, even though over 85% of the population wears their seatbelt (so half the deaths are coming from 15% of the population). I will also assume that a road trip that is an alternative to flying consists of 80% rural interstates and 20% urban interstates. Data for each road type per year can be seen below (last column 2018):

80% rural interstates and 20% urban interstates with a 45% seatbelt adjustment (because let’s be honest, if you’ve made it this far into an article about the rationality of flight cancer adjustments and linear no threshold radiation modeling, you probably wear your seatbelt) will lead to about .385 fatalities per 100 million miles or a 1 in 259,740,260 chance of dying per mile which is about in line with winning the Powerball. This means about a 1 in 259,740 chance of dying on a 1,000 mile road trip.

To put this into context, I multiplied these odds by the expected minutes left to live between 21 and 60 and added a (completely arbitrary) emotional suffering multiplier of three (I personally assigned slightly less suffering than cancer). Assuming a speed of 75 mph, I came up with this graph: 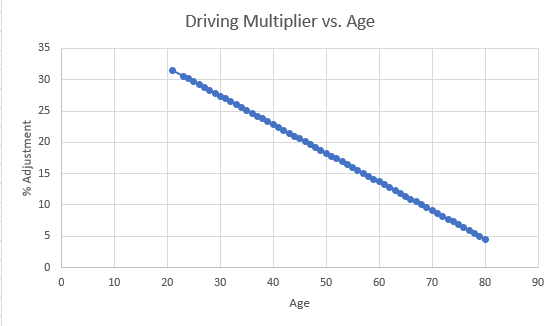 For example, at 21 years old I should mentally add about 30% to a road trip to determine if that drive is still worth it.

I personally think this graph is more legitimate because the danger of driving is more real, but the emotional suffering multiplier is still completely arbitrary and opens a whole philosophical discussion that nobody has the answer to. Here is the graph without a multiplier: Furthermore, I only assumed that you are going to wear your seatbelt. In reality, it’s unlikely that you are going to be drunken street racing while driving your family to Disney or whatever or be on the road at the times when other people are likely to be drunken street racing. Serious accidents are over-represented at 3am on a weekend and not during the morning commute. Your odds are probably better if you watch out for the other idiots. One defensive driving course claims that it will reduce the odds of a fatal accident by 50% but does not provide evidence of that. It is not unlikely, in my opinion, that the median person is actually better than average at driving and less likely than average to die in an accident due to the type of people with five DUIs. Maybe the graph should be shifted down to account for that, but at the same time, I didn’t account for injuries or exposure to increased particulate pollution, so it might be a good estimate.

What you can take away from this article is:

• Flying is significantly safer than driving, radiation notwithstanding

• Taking the interstate is significantly safer than county roads, John Denver notwithstanding

Or, you know, could just throw your entire 401(k) (or better yet, student loans) into a ridiculous TSLA call, realize that you’ve already spent an irrational amount of time thinking about this, and live it up by reading a Reddit political argument or something.

MoData.Blog - Student Run Data Blog
—
Is it rational to be afraid of flying (or driving)?
Share this
-->