How Balanced Is Missouri S&T At Gender Pay Equality?

Have you have sat in class and instead of paying attention wonder how much does the professor responsible for the education of hundreds of students makes? Or maybe when you read about gender discrimination, does it really exist in your school? And if it does perhaps it’s different every topic? Do good teachers get paid more?

How much they’re paid 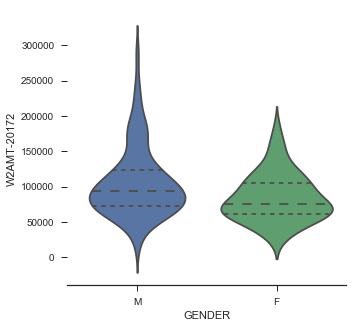 If you look at the W2AMT-2017 (the amount the professor made in 2017), the median for men is slightly higher, most likely due to specific outliers (being extremely high paid professors and executive positions).

The violin plot was created with the distribution of salaries for each sex for each department. We are an engineering and science focused school, so the distribution of men in the engineering departments are at the same level as other schools. However, Psychology seems to be a more female dominated field in our school with 10/14 professors being female. It also seems to apply to the Arts and Business department. But everywhere else, it seems males make more.

If you aren’t a college student, Rate My Professor is a website (RateMyProfessor.com) that allows students to rate a specific professor. The website asks for: rating, difficulty, and would take again. Each are rated by students from a 0-5.0 scale. There used to also be a “hotness” rating, but we don’t talk about that anymore.

This violin plot is similar to the previous one above except W2AMT-2017 (the amount the professor made in 2017) is swapped with RMP_RATING (the rating the professor received on RateMyProfessor.com).
The means are all over the place by department. In math, females seem to have a higher mean than males. Though it appears when there is a large difference in means, it’s usually a case where the mean for female professors is greater than male professors (Mathematics, Economics, Civil Engineering, Mechanical & Aerospace Engineering, Chemistry, and Computer Science).

As we split the data into professorship positions we see, unfortunately, that at lot of cases there is a negative slope of the fit line. Meaning that the higher the difficulty (RMP_DIFFICULTY), the more likely the professor is less liked. Though it is interesting to see whether relatively where male or female professors are liked.